SourceForge houses a lot of popular open source projects (and a lot of forgettable half-assed efforts as well) by providing development infrastructure, hosting, and community resources to developers. It is truly one of the real hubs in the free software world. They’re owned by VA Software Corporation, a business that has had considerably mixed success after its spectacular IPO back in Bubble 1.0.

People have asked the question “What if SourceForge disappeared?” for years now, but I have to wonder if we should be asking this question again. Now, SourceForge has its warts, but it’s ultimately a beneficial service. And, even if they did disappear, it’s highly unlikely that the open source movement would be handicapped for any real length of time.

But here’s why I ask the question: 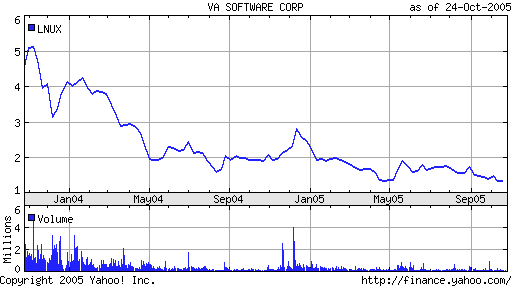 That’s the stock price for VA Software. For those of you without an accounting degree: it’s declining. When their stock price hits the $1 mark and stays there for 3 months, they get into territory that we all have to be concerned about because NASDAQ can delist them from the exchange. Now, it’s not as simple as that and VA take evasive action in order to reduce the possibility of this event occurring (reverse stock splits are one), so I’m not making any definitive predictions. But when delisting occurs, it’s frequently viewed as the first nail in the coffin of a publicly traded company. Perhaps the most damage is caused by the appearance that the company is somehow unstable, badly managed or not creditworthy. This can make it very difficult for the company to maintain their credit line and manage cash flow.

My guess is that the open source world could feel some big shockwaves for about 3-6 months they disappeared. Active projects would need to find new homes, migrate CVS repositories, websites, mailing list archives and other time-consuming tasks. All the data in Google’s big search index for *.sourceforge.net would be out of date… and since Google only crawls the web a few times per year, it’s likely that this could hamper our ability to google for bugfixes in mailing lists, etc.

So it made me think: what’s Plan B? I’m don’t think there is any general-purpose solution. GNU’s Savannah exists for those projects released under the GPL. We do have java.net for Java projects. Apache, Codehaus and others are a little more closed. You can’t just sign up and get an account with them.

In the absence of an alternative to SourceForge, the implication is really that new projects would have nowhere to go. Developers would need to set up, pay for and maintain their own infrastructure and we’d likely rely on Google to index all of this to provide some kind of discovery process. And I guess that we’d get “community” via the blogosphere (And can someone please send me the URL for the blogosphere???).

Some more thoughts, since I’m on a roll: maybe the Big G or the Big Y! would step up to the plate and provide a huge infrastructure for us developers to work on top of. And maybe we could also get access to their runtime environments for certain projects. Hey, I’d love to have a reason to finish my Accord project and see that running on 15,000 servers. Google says that they want to organize the world’s information and make it useful. I can’t imagine a more fertile ground than all the source code in the world.

I think that the problem with SourceForge is that they are providing 1999-era functionality based on a business model that really is not much more than an afterthought after the collapse of their hardware business. Consequently, the core functionality in the SourceForge project hasn’t changed all that much in the past six years. All the projects on SourceForge are effectively partitioned… we don’t see any tools for figuring out code reuse possibilities or anything particularly innovative.

And there’s a lot that could be done if someone took the lid off of this metaphorical box.

3 thoughts on “SourceForge and the $1 Mark”